Anointing of the Sick 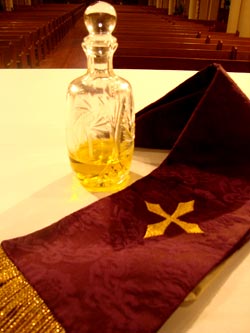 Anointing of the Sick is a sacrament of healing. The idea behind this sacrament is that we are all members of the body of Christ. When one of us suffers, all of us suffer, and all of God's creation suffers with us.

"Illness can lead to anguish, self-absorption, sometimes even despair and revolt against God. It can also make a person more mature, helping him discern in his life what is not essential so that he can turn toward that which is. Very often illness provokes a search for God and a return to him."   (Catechism of the Catholic Church, paragraph 1501)

Through the Sacrament of Anointing, Christ strengthens the faithful who are afflicted by illness, providing them with the strongest means of support. Jesus showed great concern for the bodily and spiritual welfare of the sick and commanded his followers to do the same. The celebration of this sacrament is an opportunity for the deepening of the faith of the community who are able to witness the faith and devotion of those being anointed.

This is a ministry of comfort. Through Anointing, the sick are reminded that Christ and the Church are in communion with their suffering. The Holy Spirit shares the blessings of health, trust in God, and strength against temptation

What is "Extreme Unction" or "Last Rites?"

“Extreme Unction” is an older expression for the Anointing of the Sick. “Unction” means anointing; and this is the anointing for someone who is in extremis (Latin for “near death”). “Last Rites” would refer to the Anointing of the Sick, along with the two other Sacraments that may be received at the same time if the patient is conscious: Penance and Holy Communion. Holy Communion received shortly before death is called “Viaticum” – Latin for “[food to take] with you on the journey.”

How is Anointing of the Sick believed to be "healing?"

In the Sacrament, the Church prays that the person anointed will regain physical health. It is also intended for interior healing, as the person is comforted by the help of the Lord who is present in the Sacrament. And there is a spiritual healing, since the Sacrament brings the remission of sins to a person who is no longer able to make a verbal confession.

What is the origin for the Anointing of the Sick?

The Gospels relate many occasions when the Lord Jesus encountered the sick, healed them, and forgave their sins. While He was still on earth, the Lord sent His Apostles out with the instructions to cure the sick. And in the Epistle of St. James (5:14-15), we have a very clear indication of the practice of this Sacrament in the early Church.

Who can administer the Sacrament?

“Only priests (presbyters and bishops) can give the sacrament of the Anointing of the Sick, using oil blessed by the bishop, or if necessary by the celebrating presbyter himself.”  (Catechism of the Catholic Church, paragraph 1531).

How is the Sacrament celebrated?

The two principal actions of the Sacrament are the laying on of hands, and the anointing itself.

The priest lays his hands on the head of the sick person in silence. The laying on of hands is an ancient gesture by which the Holy Spirit is invoked. In the laying on of hands, the healing and strengthening power of the Holy Spirit is asked. (It is interesting to note that this very same gesture is used over the bread and wine at Mass, just prior to their consecration. In some sense, the suffering of the sick person is “consecrated” to God by being joined to the sufferings of Christ.)

The priest uses “Oil of the Sick” – one of the three holy oils blessed each Holy Week by the bishop. He anoints the forehead and the palms of the hands of the sick person, with very brief accompanying prayers.

Where is the Sacrament celebrated?

Since those who receive the Sacrament are seriously ill, people are most often anointed in their homes, a hospital or a nursing facility. People anticipating surgery sometimes ask to be anointed at church, after Mass on a Sunday or weekday. Some parishes have “Communal Anointing” where a relatively large number of people present at a particular Mass are all anointed. The Cathedral has a Mass of Anointing which is usually held in late October.

Who should be present during the anointing?

It is beautiful to have family members or friends present when one is anointed, but it is not required. Those who are able to be present can share in many of the prayers of the ritual. But of course, if the patient is able to make a confession, others are asked to step out of the room for that time.

Can the Sacrament be received more than once?

Unlike some Sacraments (i.e. Baptism) Anointing is not a Sacrament that can be received only once, nor is it intended to be frequent (like Holy Communion). The Church allows for this Sacrament to be administered several times for the same person, if necessary. One might certainly become seriously ill more than once in a lifetime, or may face serious surgery on several occasions. In each instance, one should be anointed. Or again, if one has an illness which worsens over time, it would be appropriate to receive the Sacrament more than once in the course of that illness – certainly including when near death.

When should I call the priest?

In “olden days” people waited until the person was near death before they called the priest. Today it is preferred that the priest be called at the beginning of a serious illness and not at the end.

“The proper time for receiving this holy anointing has certainly arrived when the believer begins to be in danger of death because of illness or old age.” (Catechism of the Catholic Church, paragraph 1529)

How can I schedule an anointing?

During ordinary business hours, just call the Cathedral office (616) 456-1454 and speak with the receptionist. After hours the automated phone system will direct you to the on-call priest.